According to Merriam-Webster’s online dictionary, race is defined as “a class or kind of people unified by shared interests, habits, or characteristics.” What this definition fails to include is that for generations race has not only been a unifying term, but rather a term many felt defined who they were as a person and their place in society. Growing up, we all hear about slavery and the history of how poorly some races have treated others, however this racism has not disappeared and still exists in our lives today. While the majority does not regularly think about or face racism on a daily basis many minority group are forced to deal with their race’s stereotypes.

We asked friends, family and strangers the following questions:

“What percentage of your life have you felt like the minority?”

“What are racial stereotypes you have faced?”

Here were the results: 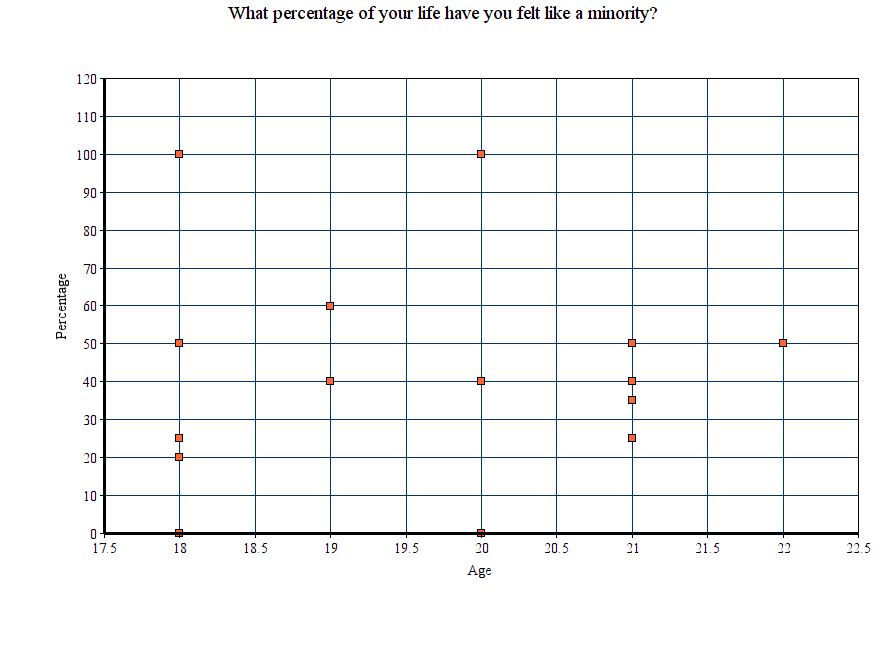 For our second question, the answers collected varied. We noticed that most of those that identified as white, also listed “nothing” or “none” under stereotypes faced. Although one participant wrote “not being athletic, people assume I come from a good background/ have money. People assume I have a lot of privilege I do not have.” Those who identified as African American or of mixed race gave rather different responses. For example, one student wrote “some white students don’t want to sit next to me and they look at me weird when I sit in the front of the class.” Still others listed that classmates have assumed they were uneducated and mean or aggressive.

We also went out and asked students here at Oakland University if they or a friend of theirs have faced racial stereotypes. The majority of those we approached simply did not feel comfortable discussing it. Fortunately, there were several contributors who were okay with being filmed.

Here’s what they had to say:

For those who preferred not to filmed shared their stories through audio.

Here’s what was recorded:

Imani went on to ask the daring question of “What types of racial stereotypes have you experienced in your life?” Below are some of the comments she gathered via Facebook from people.

Imani Battle “You’re not like those other blacks girls” umm, excuse me, I embody all black women proudly WHAT DO YOU MEAN?!”

Kyle A Key “I get extremely out dated stereotypes. Last month a dude asked me if my vagina was sideways… I also get “your English is really great.” And “where r u from?” Then I tell them here and they go “no, but where r u from?” They typically say it slower for me to understand. I’ve also been asked if I’m related to some other Asian person who’s in the same room as me.”

And  from Prostell Thomas – Also at work and socially I am called on pretty quickly in situations that demand protection or aggressive or brute characteristics. The irony is I am that, but I wonder what makes people think I am adept at things they have never seen me do. Or do they just assume they can get the Black Guy he’s a thug….”

Marquette Clark “Just being told I’m not like most black people.”

Ivanna Espy “Folks surprised I am well educated, a hard worker, and still get accused of this notion I “talk white”.”

Andrew Simmons “Being watched in any store I walk in, especially when I had locs.”

Renate Seldon “Being watched in stores. I’ve gone up to many ‘secret’ security and asked them if they have found what they are looking for. I was in Best Buy once looking at cameras. A guy actually fell on the floor as he rounded the corner in an attempt to ‘catch me in the act’ as i reached for a camera i wanted to buy. All i could do was laugh and ask him how stupid he felt. It is annoying. Needless to say i didn’t buy the camera there. I did but it online.”

Mary Johnson “The assumption that all Black people have a God concept.I have to constantly remind people that God has an Inception Date that does not antedate my Ancestors.”

These are just a few  examples of how people feel and deal with racial stereotypes. Ask yourself, lately have I been a part of a racial stereotype? Have I racially stereotyped someone else? Rather you feel like some above or not, make sure to keep sharing these experiences so that we can overcome them.