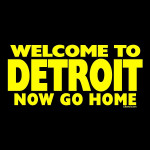 So while some of us are celebrating Detroit’s come up, many locals are steadily being treated like the dirt underneath Dan Gilbert’s fancy boots.

Twenty four years of living in the city and I have yet to see much effort around the build up of the people who are actually suffering due to the lack of resources.

The sudden change has me feeling less and less hopeful for my future here. If anything the new changes are turning me all the way off, the new hipsters make me vomit and the New York style traffic is starting to make me want to scream. Sadly, it’s making me plan to relocate to a place that accepts my kind of people (middle class/skating on thin ice towards the poverty line) with equal opportunities.

I cringe at the way the people from out of town are slowly creeping in acting like they have been here for years through all the bullshit.

If you weren’t here during the difficult times how can you be a real part of the shiney come up? Your money is the only thing that suggest that you are apart of the change happening. Money may be everything to you but to some of us…money has been one of those hard things to come by. Detroit residents has struggled to get money every since the crash of the auto industry and the riots that came from the devastation of thousands of jobs lost.

I have heard every story in the book though, front to back-side to side about how “New Detroit” is good for the locals. “It brings so many opportunities to the creative and music scene,” “Why wouldn’t you want to be apart of the development?” Well the reason is because the development of Detroit does not seem include me or many of the other amazing locals.

I still struggle to live and rent a home in some of the same areas where they are moving New Yorkers and other rich kids into for exclusive rates that seem to go over my budget seeing that this black entrepreneur has yet to see a financial break.

We have artist from different calibers who have been working for years on top of years to finally get their shine and recognition they deserve to only be left in the shadow.  We have over 100,000 residents according to the Huffington Post being displaced from their homes in 2015, unexpectedly due to tax foreclosures. Since early 2005, MLive has reported 1-3 homes in Detroit have been foreclosed due to back taxes and mortgage defaults, that leaves 139,699 homes foreclosed and 384,672 unaccounted for. The bigger catch is…families occupy a lot of the homes up on the chopping block (the numbers have slightly risen or fallen but the point remains the same.)

With a population of over 80% of blacks in Detroit we have yet to see the areas where we are supported. Black owned businesses are struggling to keep their doors open while we are seeing people move in next door with lower rent prices and better opportunities.

Where is the change directed I ask, I hate to make this a race issues, but it’s obvious that minorities have to bite the bullet AGAIN! It’s not just black people, note that – it’s all people that don’t fit the new style of gentrified.

In the same Midtown, which is really Cass Corridor you see development happening at a rapid pace while right down the street at the NSO (Neighborhood Service Organization) you can clearly see the displacement of the people forced in one area. The NSO has been around for over 60 years helping provide care for the mentally ill, homeless and forgotten about. We can see where the line is drawn, it may be invisible to you but it’s there. Our population of homelessness in the city of Detroit according to the Michigan Coalition Against Homelessness is well over 90,000 individuals. We have plenty of room for them in the city with the unoccupied space, it’s just the unoccupied space isn’t up for grabs for such people.

I could keep going on about the changes occurring but to waste my time is not something I like to do.

I just want the locals to know that until we buy land, build our own homes, learn to grow food and heal our community we will continue to be looked at as foreigners on our own soil. If we can’t depend on the support of the new development then at least we can start to occupy areas of the city that aren’t apart of the shiney come up in their eyes. We have amazing space and opportunity on the East and West side of Detroit, if they want us out of “Midtown,” we walk with pride to the next abandoned block and take over…completely. No, it’s not giving up it’s becoming smarter and more logical. Who has time to argue with millionaires? They don’t understand our struggle.

Once we take our dollar out of “Midtown” we began to see what big part of the land can be invested in. First step is, search your heart out for the space that needs energy, combine your energy and resources with spaces that need support – no money like me? Invest in more small business when you can, volunteer to support those affected by change. It all counts, a little and a lot!

New Detroit, we the locals are fighters; can’t you tell? We been living in a zone where ya’ll declared a state of emergency, we don’t die easy we get stronger from struggle so if you think this shit gone fly…

A local of Detroit, with pride!